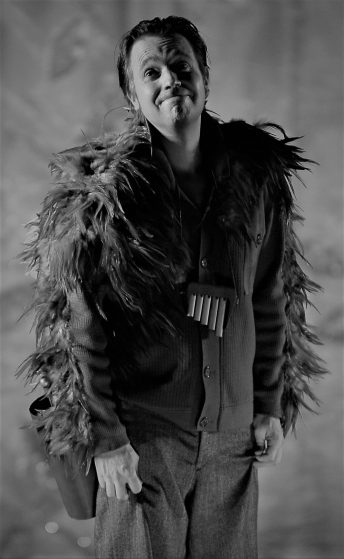 Born and raised in Croatia, Miljenko Turk’s passion for music and singing was recognized and encouraged at an early age. He played the piano at home as a small child.

He then attended the primary school for music and art in his home town Čakovec and the music high school in Varaždin, which he graduated as one of the best in his class.

Thanks to one of his teachers there, Miljenko Turk enrolled at the University of Music and Performing Arts in Graz after high school. This teacher advised him to leave Croatia and complete a musical education abroad. The excellent reputation of the Musikhochschule Graz as well as the proximity to his beloved homeland made it easy for him to decide to enrol in Graz.

At the beginning of his studies Miljenko Turk spoke very little German and only survived the audition because of his vocal and musical achievements and the promise to learn German. Thanks to his pronounced autodidactic abilities, however, he was able to learn the German language quickly and largely independently. Today Miljenko Turk speaks German just as confidently as his mother tongue Croatian. He also speaks English, Italian, Russian and Japanese.

After completing his vocal studies in Graz, Miljenko Turk completed his studies with Hans Sotin at the Hochschule für Musik und Tanz in Cologne.

In 2004 he made his debut at the Dresden Semper Opera and at the Bayreuth Festival.

He has appeared at the Salzburg, Bayreuth and Eutiner Festivals, the Ludwigsburger Schlossfestspiele, the Styriarte Festival in Graz, the Festival Maggio Musicale in Florence, the Garsington Opera Festival in Buckinghamshire, the Théâtre des Champs-Elysées in Paris, at the Opéra Bastille Paris, at the Opéra National du Rhin Strasbourg, at the Croatian National Theatre in Zagreb, at the Volksoper Vienna, at the State Operas in Berlin and Stuttgart, at the State Operetta Dresden, at the operas in Leipzig and Rostock as well as at the E.T.A. Hoffmann Theater in Bamberg.

Miljenko Turk has also appeared with great success at the Oman Guest Performance of the Cologne Opera at the Royal Opera House Muscat. Further guest appearances with the Cologne Opera led him to the Berlioz Festival in La Côte-Saint-André and with the Vienna Volksoper to the Tōkyō Bunka Kaikan.

Miljenko Turk also has a broad concert repertoire. He has performed several times in the Kölner Philharmonie, the Munich Gasteig and the Düsseldorf Tonhalle. He gave guest performances with the Radio Filharmonisch Orkest at the Concertgebouw Amsterdam and as well with the Gürzenich-Orchestra at the Philharmonie de Paris and took part in the premiere of Torsten Rasch’s “Orchesterlied” after a text by Thomas Brasch at the Fruchthalle in Kaiserslautern. Together with the NDR Symphony Orchestra he was a guest at the Laeiszhalle in Hamburg. He performed together with Maestro Francois-Xavier Roth and the Les Siécles Orchestra for the Berliner Festspiele 2021 at the Berliner Philharmonie. Miljenko Turk also sang at the Frankfurt/Main Opera, for the Tongyeong International Music Foundation in South Korea, at the Freiburg Theatre, at the Staatstheater Darmstadt, in a production of the Teatro della Scala at the Pirelli Hangar Bicocca Milano and at the Jennersdorf Festival Summer (jOpera) in Burgenland. With Maestro Valery Gergiev and the Munich Philharmonic, Miljenko Turk was performing a concert production of Wagner’s Tristan und Isolde (2nd Act)  again at the Munich Gasteig, the Festspielhaus Baden Baden and the Elbphilharmonie Hamburg.

He also loves the Lied (among others he was a master student of Fischer-Dieskau) and Chancon as well as modern operas. After appearances at the Cologne and Heidelberg operas, the Dresden Semperoper, the Concertgebouw Amsterdam, the Tongyeong Music Festival and collaboration with the Ensemble Modern with Wolfgang Rihm’s Jakob Lenz and Die Eroberung von Mexico, Peter Ruzicka’s Celan and Benjamin, Johannes Maria Staud’s Die Antilope, Bernd Alois Zimmermann’s Die Soldaten, Mauricio Kagel’s Mare Nostrum, I-Sang Yun’s Der Traum des Liu-Tung and Salvatore Sciarrinos Quaderno di strada (12 canti e un proverbio per baritono e strumenti) he has long established himself as an expert on modern opera.

Miljenko Turk is very committed to the dissemination of music through direct contact with students and enjoys a young audience. As a appreciate lecturer, he passes on his knowledge and experience to young singers. His expertise is also in demand as a jury member.